The ROCKPro64 is the most powerful Single Board Computer released by Pine64. It is powered by a Rockchip RK3399 Hexa-Core (dual ARM Cortex A72 and quad ARM Cortex A53) 64-Bit Processor with MALI T-860 Quad-Core GPU. The ROCKPro64 is equipped with 2GB or 4GB LPDDR4 system memory and 128Mb SPI boot Flash. There is also an optional eMMC module (up to 128GB) and microSD slot for booting. The board is equipped with a PCIe x4 open ended slot, 1x USB 3.0 type C Host with DP 1.2, 1x USB 3.0 type A Host, 2x USB 2.0 Host, Gigabit Ethernet, PI-2 GPIO Bus, MiPi DSI interface, eDP interface, touch Panel interface, stereo MiPi CSI interface, as well as many other peripheral device interface such as UART, SPI, I2C, for makers to integrate with sensors and other peripherals. Various Operating System (OS) are made available by open source community such Android 7.1, Linux (Ubuntu, Debian, Arch) and many more to come. 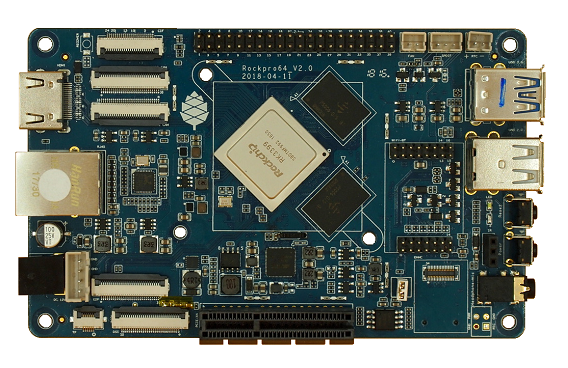 A red LED behind the reset button comes on if there is an error condition.

The Power button is the same as on your mobile phone - press and release after about 1 second to power on. Press and hold for about 3 seconds to power off.

The reset button perfoms a reset.

There is an unlabelled (on the PCB silk-screen) 2-pin jumper between the eMMC socket and the SPI chip. The default condition is OPEN (no jumper). It is useful for controlling the boot as follows:

In the 'ROCKPro64 Software and OS Image Download Section' you will find a complete list of currently supported Operating System images that work with the ROCKPro64 as well as other related software.

Please see the NOOB page for detailed instructions to get your RockPro64 running Android.

There are a couple of distribution options available:

Folks are working on getting Arch going here in the forum.

Please see the NOOB page for detailed instructions to get your RockPro64 running linux.

How to update your linux

For Debian/Ubuntu images apt-get update/upgrade will keep the distribution up to date.

Should also update Ayufan images to next release when available (modify /etc/apt/sources.list.d/ayufan-rock64.list if you want to pick up pre-releases)

After you install an Ayufan image you will find some scripts in /usr/local/sbin/ that may be useful. (Need to expand this section)

Ayufan has some old documentation on video playback here. (Of course for RockPro64 you need midgard modules - this section to be updated.)

extlinux is in use on Ayufan images (at least) which enables some switching between installed kernel versions - intro documentation is here.

ROCKPro64 Board Information, Schematics and Certifications