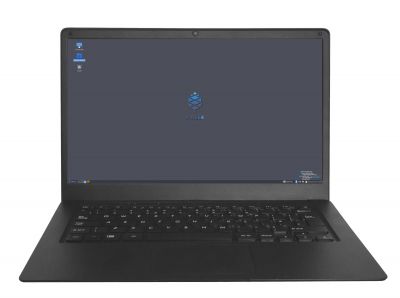 It is built to be a compelling alternative to mid-ranged Chromebooks that people convert into Linux laptops. It features an IPS 1080p 14″ LCD panel, a premium magnesium alloy shell, high capacity eMMC storage, a 10,000 mAh capacity battery, and the modularity that only an open source project can deliver.

Key features include: the RK3399 SOC; USB-C for data, video-out and power-in (3A 5V); privacy switches for the microphone, BT/WiFi module, and camera; and expandable storage via NVMe (PCIe 4x) with an optional adapter.

The keyboard and trackpad both use the USB 2.0 protocol. The LCD panel uses eDP MiPi display protocol.

Many different Operating Systems (OS) are freely available from the open source community and partner projects. These include various flavors of Linux (Ubuntu, Debian, Manjaro, etc.) and *BSD.

Under 'Pinebook Pro Software and OS Image Download Section' you will find a complete list of currently supported Operating System images that work with the Pinebook as well as other related software.

Some of the provided OS images are still in beta or nightly build and only fit for testing purposes. These images ought to be avoided for normal usage - use them at your own risk

The Pinebook Pro is available in two keyboard configurations: ISO and ANSI. Both the keyboard and trackpad in the Pinebook Pro use the USB 2.0 protocol and show up as such in xinput. The keyboard features function (Fn) keys in the F-key row, which include display brightness controls, sound volume, trackpad lock, and other functionality. There is also a custom PINE64 logo key that functions as Menu/Super key. It has also a secondary functionality for setting the privacy switches.

The keyboard firmware is open sourced can be flashed from userspace using the provided utility.

Documentation for the keyboard can be found in Datasheets for Components and Peripherals.

The UK ISO Layout does not have dedicated keys for characters like the German umlauts (Ä,Ö,Ü, etc). Certain characters can still be generated by means of either key combinations or key sequences.

There are three privacy switches mapped to the F10, F11 and F12 keys on the Pinebook Pro keyboard. They de/activate the following:

The trackpad is large, smooth (metallic to-the-touch), and has two actuating buttons. It is the only component of the Pinebook Pro held in place with strong adhesive tape. It supports multi-touch functionality.

The trackpad firmware is open sourced and can be flashed from userspace using the provided utility (https://github.com/ayufan-rock64/pinebook-pro-keyboard-updater).

Documentation for the trackpad can be found in Datasheets for Components and Peripherals.

In total there are four LEDs on the Pinebook Pro, three of which are placed in the top left side of the keyboard, and one near the barrel-port:

1. The red LED next to the barrel-port indicates charging. It will illuminate when mains power is supplied to the Pinebook Pro from either the standard power supply unit or a USB-C smartphone charger.

2. The power indicator LED on the Pinebook Pro supports three different colours: green, amber and red. It is also capable of flashing/blinking to indicate activity. In the default Debian with MATE build, green LED means power and red means suspend (amber is unused).

(The Num and Caps lock LEDs have a secondary function. When the privacy switches get activated they blink to confirm that switch has been activated.) 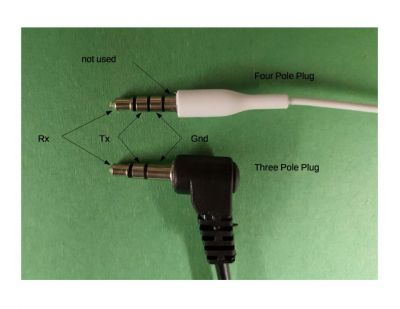 With the UART switch in the ON position, console is relayed via the audiojack and the laptop's sound is turned OFF. PINE64 store sells a dedicated serial console but you can make your own if you have a serial console USB 2.0 adapter and old/ broken headphones. If you do make your own cable, please ensure that you are using a 3.3v interface (such as the CH340, FTDI-232R or PL2303 - which are often sold in 3.3v and 5v variants) to avoid damage to the CPU.

Insert the USB plug of the cable into an open USB port on the machine which will monitor. Run the following in a terminal:

you should find a line similar to this:

You may have to clean the USB contacts of the Serial cable to get a good connection if you do not find that line.

The audio jack of the Serial cable should be fully inserted into the Pinebook Pro audio port.

Serial output should now be accessible using screen, picocom or minicom (and others). Examples:

Current versions of u-Boot do not use the UART for console output. The console function is activated by the Linux kernel. Thus, if you use a non-Pinebook Pro Linux distro and want the UART as a console, you have to manually enable it.

The optional NVMe adapter allows the use of M.2 cards that support the NVMe standard, (but not SATA standard).

The v2.1 SSD adapter that is shipped with the initial Pinebook Pro batches has a couple of problems although with a little hacking they can still be used. There is an unofficial tutorial on the forums describing the mods.

As long as the kernel in use has both the PCIe and NVMe drivers, you should be able to use a NVMe drive as a data drive. Even automounting at boot, (from eMMC or SD card). This applies to both Linux and FreeBSD, though Android or Chromium OS may need testing. Simply use the normal partitioning and file system creation tools.

It is not possible to boot directly off a NVMe drive. The SoC does not include the NVMe boot code, thus the NVMe is not in the SoC's boot order.

Howevever, it is possible to initially boot off an eMMC or SD card, then transfer to a root file system on the NVMe. Even have all the other file systems on the NVMe. except /boot.
Instructions for doing this are not complete as of 2019/11/20, but the forums has had people doing this with successful results.

The mainboard features two (disconnected by default) bypass cables that are only to be used with the battery disconnected. The female (10) male (6) ends of the bypass cables can be connected to provide power to the mainboard if you need to run the laptop without a battery. Please refer to this engineering notice.

Under 'Service Guides for Pinebook' you can find instructions guides concerning disassembly of:

Note: The installation process on Pinebook Pro similar to 14" Pinebook

Note: The installation process is the reverse order of removal guide

Tips, tricks and other information for troubleshooting your Pinebook Pro

New from the factory - Pinebook Pro won't boot / power on

This issue occurs when your thumb or edge of the palm makes contact with left or right tip of the trackpad when you type. This is due to the palm rejection firmware being too forceful. Instead of only disabling the trackpad, so your cursor does not move all over the screen, it disables both the trackpad and the keyboard.

Using Fn+F7 to disable the touchpad will keep it from also disabling the keyboard.

A firmware update has been released to address this.

Accessing the Internals - Disassembly and Reassembly 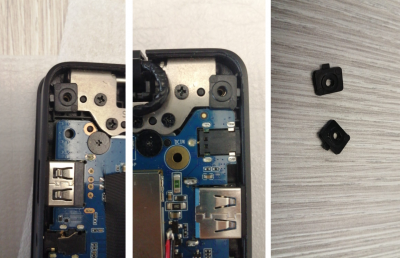 WARNING: Do not open the laptop by lifting the lid while the Pinebook Pro bottom cover is removed - this can cause structural damage to the hinges and/or other plastic components of the chassis such as the IO port cut-outs.

When disassembling the laptop make sure that it is powered off and folded closed. To remove the bottom cover of the Pinebook Pro, first remove the ten (10) Phillips head screws that hold the bottom section of the laptop in place. Remove the cover from the back where the hinges are situated by lifting it up and away from the rest of the chassis.

During reassembly, make sure that the back-screw standoffs are in place and seated correctly. To reassemble the Pinebook Pro, slide the bottom section into place so it meets the front lip of the keyboard section. Secure the front section (where the trackpad is located) in place using the short screws in the front left and right corners. Then proceed to pop in the bottom panel into place. Secure the bottom section (where hinges are located) by screwing in the left and right corners. Then screw in the remaining screws and run your finger though the rim on the chassis to make sure its fitted correctly. Note that the front uses the remaining 2 short screws.

NOTE: The screws are small and should only be finger tight. Too much force will strip the threads. If after installing screws the back cover plate has not seated properly on one side, open the display and hold the base on either side of the keyboard and gently flex the base with both hands in opposing directions. Once the side pops further in, then recheck the screws on that side. If it does not pop back in, just let it be.

There are two switches on the main board: disabling the eMMC (24), and enabling UART (9) via headphone jack.

The Reset and Recovery buttons (28): the reset button performs an immediate reset of the laptop. The Recovery button is used to place the device in maskrom mode; this mode allows flashing eMMC using Rockchip tools (e.g. rkflashtools). 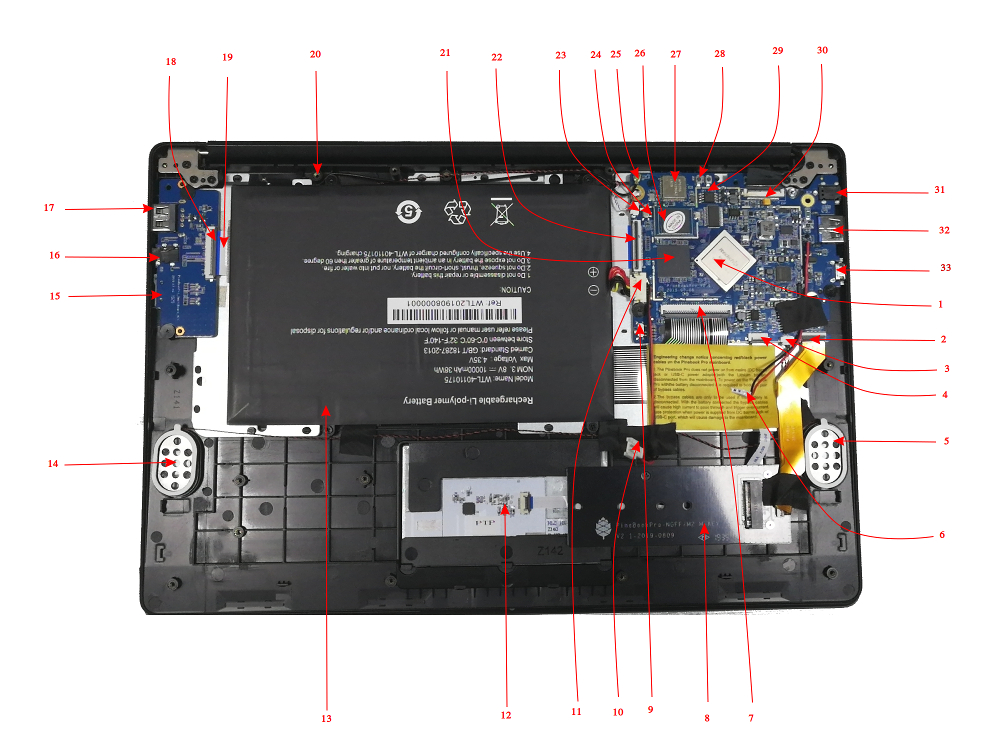 At this time, the Pinebook Pro ships with a Debian + MATE build with uboot on the eMMC. Its boot order is: SD, then eMMC. Booting off USB storage is not currently available, but will be in the future.

(An update has been pushed for the default Debian + MATE build that improves compatibility with booting other OSs from an SD card. In order to update, fully charge the battery, establish an internet connection, click the update icon in the toolbar, and then reboot your Pinebook Pro. Please see this log for details.)

Please note that PCIe, the interface used for NVMe SSD on the Pinebook Pro, is not bootable on the RK3399 and therefore is not a part of the boot hierarchy. It is possible to run the desired OS from NVMe by pointing extlinux on the eMMC to rootfs on the SSD. This requires uboot, the Kernel image, DTB, and extlinux.conf in a /boot partition on the eMMC.

The eMMC storage will show up as multiple block devices:

Only the last is usable as regular storage device in the Pinebook Pro. The device number of "1" shown above may vary, depending on kernel.

The RK3399's mask 32KB ROM boot code looks for the next stage of code at byte off-set 32768. This is where u-Boot code would reside on any media that is bootable.