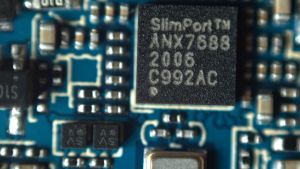 "The AW3512/AW35122 includes the Quick Output Discharge (QOD) feature, in order to discharge the application capacitor connected on OUT pin. When EN pin is set to low level (disable state), a discharge resistance with a typical value of 276Ω (AW35122: 75Ω) is connected between the output and ground, pull down the output and prevent it from floating when the device is disabled."

Hardware workaround is desoldering U1305 and U1309 switches (BGA like packages). This will void the VCONN control, but it will release the CC pins for their proper connection detection and negotiation roles.

HW fix is to replace AW3512 with a variant of the chip that preserves the EN signal polarity and that doesn't have the "quick discharge function" that ties the output to the GND via a 75 Ohm resistor when the switch is OFF. mozzwald used NCP334FCT2G as a replacement. PCBA revision 1.2a onwards incorporate that fix.