The PINE64 NAS Case is intended for either a Network Attached Storage (NAS) or Desktop application, but it can also be used in a number of other server capacities. It is built from precision-cut and powder-coated aluminum. The physical dimensions are 232.4mm (Width) x 105.0mm (Height) x 145.2mm (Depth).

You will need the PCIe to SATA adapter from the PINE64 store to connect your disks to your ROCKPro64 board. WARNING: this adapter does not work well with two HDD!

(The fan and heatsink are highly recommended)

Make sure nothing is plugged into your ROCKPro64 - including a micro SD card. If you intend to use a heatsink with your board then please install it now before proceeding. If you bought the heatsink from the Pine64 store it comes with thermal paste and/or a thermal pad. You can use one or the other (not both!). The thermal pad is easier to apply but the thermal paste should be better at cooling if properly applied.

This is the right time to plug in the SATA and custom power cable. The SATA cables plug into the ports on the top or front of the adapter while the power cable plugs into DC header located on the board - just below the power jack, to the left of the Ethernet port (when viewed from front).

For 2.5” drives make sure that the drives are oriented up and their SATA and power ports face the front of the NAS Case.

The fan should be mounted on the right-hand side of the case. We suggest that the fan is oriented for negative pressure, blowing air out of the case rather than taking air in. (User:AlephNull disagrees and recommends a positive pressure configuration both to allow a filter to be placed over the intake to prevent dust ingress and because the cage on the outlet side of the fan helps keep the wiring for 3.5" disks away from the fan blades). For best cable management results, have the fan power lead face the front of the case so that it can easily be routed to its header located next to GPIO pins on the ROCKPro64. The fan should be secured using 4x long screws (that fasten into bolts) which can be found in the see-through bag supplied with the NAS Case. Plug in the fan at this stage of the installation and route the cable at the bottom of the front of the case. 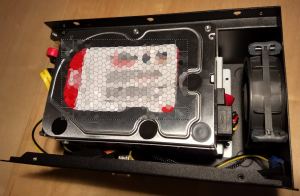