The "Model B" Acrylic Open Enclosure is a case for "Model B" sized single-board computers sold by Pine64, available from the official store.

To install the SBC inside the case, stick the long screws into the SBC mounting holes from below, place the board such that the screws sit in its mounting holes, and screw on the brass fasteners on top of the SBC. 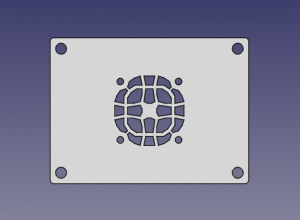 Top view of the plate 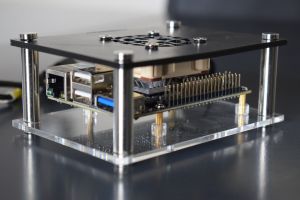 The assembled modified case with a Noctua NF-A4x10 5V PWM mounted to it. SBC is mounted all wrong here.

User:CounterPillow has created an alternate 3D-printable top plate which allows for the mounting of a 40mmx40mmx10mm fan. The STL and STEP files are available free of charge, licensed as CC-BY 4.0.

A fan is mounted to it using self-tapping fan screws usually shipped with computer fans; put the fan on the underside of the plate, and screw in the self-tapping screws from the top side. Make sure that you have the fan oriented the right way, though this being an open enclosure, there isn't really a wrong way.

Recommended printing material is PETG for its structural rigidity. However, PLA will likely work fine as well, and is easier to print. A 0.6mm nozzle was used for test prints, but any nozzle should work. Depending on the layer height you choose, your print may come out slightly thicker or thinner; this is no problem though. It's recommended to enable the advanced "Detect Thin Walls" option in slic3r to get a cleaner g-code result around the fan holes.

The print will take approximately 7.8 metres of filament, and take in the order of one hour, though this depends on slicer settings and printer model.

An unfortunate side effect of perfectly centreing the fan mount is that the SoC of the ROCK64 will be right below the fan's centre, where there is little airflow. However, the spread out nature of the heatsink and the distance between fan and SoC still allow it to cool down effectively. Its cooling performance with a Noctua NF-A4x10 5V PWM is enough to no longer throttle after a few minutes of cpuburn, but comfortably sitting at below 75°C instead. The memory has no temperature sensor, but will likely be getting a much bigger benefit due to being off-centre.